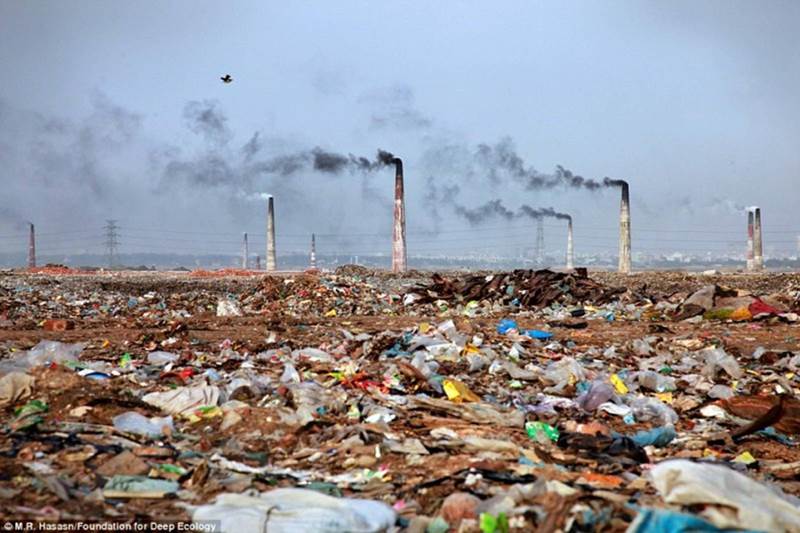 So how are we fairing with our other most precious commodity – the land that feeds us. Our Land Pollution is the contribution mankind makes towards the most important input to our growth – the food we eat.

The inorganic portion is made up of rock fragments and sand, formed over thousands of years by physical and chemical weathering of bedrock. It is from this mixture of organic and inorganic soil materials that plants grow to form one of the two basic forms of food for sustaining the life of humans (plant-life and animal/fish life). Interestingly the bulk of the animal life we consume also derives its life from the same plants growing in fertile soil and from eating other animals. Our remaining food comes from our oceans and rivers in the form of fish and the likes of seaweed, discussed in the previous section (Water Pollution). The organic portion of soil, which is derived from the decayed remains of plants and animals, is concentrated in the dark uppermost topsoil. Productive soils are necessary for agriculture to supply the world’s land-based animals and birds with food. Despite our relatively small numbers, mankind is by far the greatest consumer of this food supply, dominating and eating all the other main consumers of food from available soil.

The earliest land plants on Earth date back to around 450 million years ago, although recent discoveries suggest that microbes formed the earliest terrestrial ecosystems, at least 2.9 billion years ago. Although microbial, bacteria and archaea fossils have been found in Western Australia sandstone dating back as far as 3.48 billion years ago, microbes are thought to have paved the way for the inception of land plants well into the Phanerozoic period. So plant life on Earth predates modern man (homo sapiens) by 250 million years. By the time mankind roamed the globe, fertile soil (formed from rotting plant life) and a thriving plant life was long established, already supplementing the food needs of the animals and birds on Earth.

As explained earlier, had the homo sapiens’ brain not miraculously grown at such a rapid rate, our survival rate and demand for plant and animal foods would have been adequately satisfied, just as with our chimpanzee and gorilla relatives. Throughout the history of modern man (e.g. the Aztecs) there is the suggestion that advanced civilisations’ food demand did out strip their surrounding land’s ability to support their accelerated growth in demand, leading to their eventual demise.  Mankind’s demand for food also outstripped his actual need for food, resulting in unnecessary pressure being placed upon their food source; just as is occurring in western society.     The one obvious and quiet different culture that did survive for over 40,000 years is that of the Australian Aboriginal culture. Its survival was primarily brought about by its culture having respect for the environment. This view was constantly passed down from generation to generation as an integral part of their mindset development. It was primarily passed on through stories, known as “dream time stories” which identified elements of their environment with God-like importance. There are clearly lessons to be learnt from such survival techniques.

In more recent times, Western society began its land domination (during European’s Colonialisation period in the 1700s) extended its span of control to not only sustain growth but also to satisfy their insatiable need to increase their general standard of living and new experiences. After World War II, many countries suffered from food shortage and this facilitated the introduction of fertilizers and other agricultural chemicals into our fertile soils. Pesticides such as DDT were widely used as a potent nerve poison to control and/or eradicate disease carrying and crop eating insects. DDT was later discovered to cause the endangerment of species in the same food chain as the controlled insects, particularly birds. It is widely accepted that over the last 50 years, since WW2 mankind has inflicted more wide spread damage to our precious land and plants since the beginning of civilisation.

The most common chemicals involved in causing soil pollution are:

Today humans have instigated land pollution that degrades the Earth’s land surfaces, brought about mainly by:-

The most outstanding example on Earth of land pollution is that taking place in the Amazon region of South America, manly in Brazil. The Amazon has long been identified as “the lungs of the Earth”. The massive fresh water supply from the Amazon River (largest in the world) and its equally massive surrounding rain forest, is under serious threat from Land Pollution. An area the size of Germany has already been totally destroyed. Only 50% of the Amazon region remains intact. Interestingly the Amazon rain forests absorb about 10% of the world’s carbon emissions. This process converts carbon into water and oxygen, the two key essentials for human life. Logging is the main cause of land and plant destruction, with around 80% of it being performed illegally. Once the land is cleared 40,000 square miles of it is used for cattle ranches (producing 2 million tons of beef production each year). The rest is devoted to soya bean cotton and maize production.

Most of the labour for cattle ranches and farms is supplied by 3rd world workers. The position being taken by these workers is most intriguing. The small income they earn from their labour is used to feed their families and subsist. Most are fully aware of the destruction they are causing to this important area and the role it plays in sustaining a balance in the world’s ecology. Their view is that given the developed world is rightly appalled by the impact of their labour as they enjoy a vastly superior life style to them, that they pay these poor labours to stop this destruction, thereby returning some balance to their concerns. These workers do not regard themselves as being either wealthy or greedy but they do view the people of the advanced nations as being exceptionally wealthy and greedy and happy to exploit all the products they produce. These people see the imbalance, but do we in Western Society?  It is always the end demand that drives the pollution of our land.   Often those in western society do not get the connection between their excess demand for product with the resultant effect this is having on our plant’s precious and unique land.

What are the few preventative activities being instigated by Western Society towards reducing our land pollution and evolving a more appropriate mindset:-

What can be learnt from our indigenous people, our aboriginal people as to how they managed to live in harmony with nature for over 40,000 years?

<Yet to be written by one of our own indigenous forebearers ………>   Kie?

The rate at which mankind is polluting existing fertile soils and expanding farmlands into our equally precious forests is far far-out stripping our efforts to preserve, nurture and manage the use of our land. There is a serious imbalance here that must be reversed. The aim of this section, again is to illustrate the link between our current cultural mindset instilled in each individual and the resultant implications or damage this is causing to our precious life providing soil and plants. Here we are eating far more than we need and causing rampant obesity and associated diseases. Here we are throwing away perfectly good edible food purely because its outside appears and we give very little excess away to the needy for fear of reducing the purchase price of our food products. Yes, we truly are greedy!. Unless this imbalance is addressed soon, this precious life providing resource will be seriously depleted with dire consequences for us all. The good news is that there is a small window of opportunity for mankind to create a better balance, just like the Australian Aborigines have done for centuries.

The question arising is “How can an ordinary person like Yourself make a worth while sustainable contribution to stop/reduce the pollution of our precious land?”   The answer(s) to this key question is needing to be provided by Subject Matter Experts (SME) is this field.